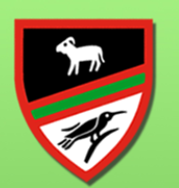 We are very proud of our school, and it's heritage. As such, we thought you may like to know a little about our history and school badge!

The school was orginally opened in February 1970, with the Junior Department opening in 1976.

Belmont Cheveley Park Primary School has had only 5 headteachers since it opened, with Mr Bedworth being here a long time!

The headteachers have been:

The school badge was discussed by the children of the school, and they decided what to put on there, however it was the secondary pupils of a school called Whinney Hill who compiled the final design - as part of their art classes.

The parts of the badge all have a meaning - and link back to the history of the area, taking us back to the 12th century!

The Ram and Raven - Our School Mascots
The ram on our badge, represents the area of Ramside, where today Ramside Hall and golf course is situated. Our raven was decided upon as many of our children live in an area close to school, which was originally called Ravensflatt. This area is now where the Cheveley Park shops are. The stripe across the badge is also supposed to represent the motorway, which splits Belmont in two.... however, this is somewhat of a historical mystery! What do you think?